Looks like Stena HSS is running again from Wales to Ireland 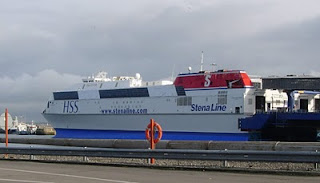 Looking at the Stena Line website it appears that the HSS Stena Explorer (pictured left) will be in operation from Wednesday 26th May.
The service was cut at the start of 2010 with the fast ferry resting in Holyhead. At the time Stena announced on their website it was being refitted, but appears taken out of service till the summer schedule was effective.

A couple of years ago the HSS crossed the Irish Sea from Holyhead to Dun Laoghaire and then it was cut back to once a day. The time of the crossing was increased to save fuel. Stena started to use the much smaller Stena Express that is used on the Fishguard to Rosslare route in the summer. The only problem is like the Irish Ferries small fastcraft, whenever the sea was rather rough the service did not operate.

Unfortunately there are only two companies operating on the Dublin/Dun Laoghaire - Holyhead rounte so not too much competion. This means prices are very high. The ferry companies charge per passenger and this can be expensive. Unlike the ferries travelling to France from Britain and Ireland, they don't charge for pets, so you can bring several dogs and cats for no extra charge!

Taking an example of a family of two adults and 3 children crossing over to Ireland on the HSS Stena Explorer on Thursday 27th May and returning on Monday 31st May travelling economy class it would cost £342 + credit card charge. This is the same price as the conventional ferry that is meant to be cheaper.

To make a return trip on the same days from Dover to Calais by Sea France would cost £107.00. This of course is a shoter crossing, however there is a lot of competion for the Dover/Calais/Boulogne route including the Channel Tunnel so prices are very competitive.

Ireland and France are both in the Eurozone and a lot of commodities are much cheaper in France like accommodation and drink than they are in Ireland. Straight away the family going to France will be some £235 better off. Car ferry costs are low.

Ireland needs the tourists, ok you can fly there and possibly get a good car hire deal. You still have to get to your local airport and pay transport or parking. You can of course take the family dog to Ireland by car and you don't need a passport for him/her either.

However that Irish Sea is costly and whatsmore the ferries are not often full (except when flights are disrupted because of volcanic ash problems or at peak times in the summer or Christmas) so why don't Stena Line and Irish Ferries do an all in price for a car and passengers and cut the prices so there are more people on board, buying food in the restaurants, drinks in the bars and goods in the shops. Passengers would benefit and tourism increase in Ireland and Britain from the two way traffic.

Let us know what you think by replying to this blog.

I recently visited your blog. It is a very interesting one. Keep it up.

Nice blog you've got. May I ask you something? Is it possible for me to ride that Stena HSS when I get to have my wales holidays?