Spring has arrived in the south of France

The Riviera Times sent out an email yesterday saying that

With the feeling of spring now definitely in the air it's not only the first of the sun-seeking tourists that are arriving on the French Riviera and in Monaco. A number of world class events are also attracting a whole host of international stars to our shores this month, with Rafael Nadal and Andy Murray here for the Monte Carlo Rolex Masters Tennis for example. And this is only the start, with the famous Monaco Grand Prix and Cannes Film Festival next month the celebrities will be descending en masse and eyes across the globe will turn their attention to this small corner of the Mediterranean. So, before the museums, beaches and restaurants start to swell with a throng of visitors, make the most of the relative quiet and say hello, once again, to the sun. "

Apart from these events there is also the Historic Monaco Grand Prix on the weekend of the 1st and 2nd May. More information at: http://www.cotedazurrental.com/historic_monaco_grand_prix.htm

It has been announced that The actress Kristin Scott Thomas will open the 63rd edition of the Cannes Film Festival - Festival de Cannes on May 12th. The film Robin Hood, the epic blockbuster by British director Ridley Scott, starring Russell Crowe and Cate Blanchett is to be screened at the Opening of the 63rd Festival de Cannes on Wednesday May 12th 2010. Find out more about The Cannes Film Festival at http://www.cotedazurrental.com/Cannes_film_festival.htm

Hope the volcanic dust clouds are not about in May as there are a lot of people who want to get to the French Riviera for all these events.

Just came across this interesting story on the Essential Travel blog.

As you might know, we’re no fans of sneaky low budget airlines here at Essential Travel. Not that we have anything against cheap flights, we’re just anti the cheeky charges no-frills that airlines slap onto the cost of a flight. So when we heard the Swansea to Cork ferry had made a comeback (essentially doing away with the need to fly with Ryanair) we were thrilled.

Swansea Cork Ferries Ltd did away with the ferry that previously sailed the route in 2006, leaving travellers bereft while businesses and tourism in both Wales and West Ireland took a hit. Local campaigners on both sides have been battling for a new service for the last two years and finally (with the help of local investors and government backing) have managed to secure a new ship (a 1982 Finnish car called MV Julia) and new service, Fastnet Line.

Fastnet Line may be small by ferry standards, but it still holds 1,860 passengers and 440 cars. There’s also a cinema, bar, cafe, shops and even pet kennels. Best of all, you get to stay in your very own cabin, heading to bed as you depart Swansea and waking up to a cooked Irish breakfast as you sail into Cork. Now that surely beats Ryanair?

Essential Travel have a great selection of Travel Insurance products at: http://www.jml-insurance.co.uk/displayproduct.php?id=29&sec=8 including a product designed for the Irish market at: http://insurance.essentialtravel.ie/?aC=200036

Posted by Philip Suter at 05:47 No comments: 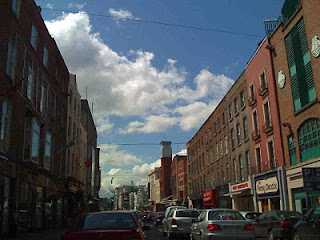 Friday 2nd April 2010 was Good Friday and the pubs opened in Limerick to serve alcholol.


The rugby match between between Munster and Leinster which was expected to provide a boost to the local economy was reason for the historic decision.

Pubs in Ireland do not open on the two most holy days in the year. Christmas Day and Good Friday which is a total surprise to many toursists. (See http://www.euro-rentavilla.com/country/dublin_at_Christmas.asp ) Shops can open as normal however. The city's 110 pubs were allowed to be open.
According to The Seattle Times " Such a judgment would have been unthinkable in the Ireland of old, where the Catholic Church enjoyed unquestioned authority from the public and deference from the government. Commentators were quick to suggest that Thursday's judgment represented a watershed in the shifting relations between church and state in this rapidly secularizing land.

"This could be the beginning of the end of Good Friday, because now legislation will have to be changed," said a jubilant David Hickey, one of the Limerick pub owners who successfully sued the state for the right to do business like any other Friday. "The option should be given to let publicans open if they want to and close if they want to. Today was a huge decision in that direction."

His side argued that keeping pubs shut for the match between hometown favorites Munster versus Dublin-based rivals Leinster would represent an economic sin in Limerick, a city suffering from exceptionally high unemployment following the shock closure of its major employer, a Dell Computers plant. Accountants testified that keeping the bars closed could cost the city an estimated euro7.3 million ($10 million) in lost income."

It will be interesting to see if there is now further pressure for all pubs in the Republic of Ireland to be open on Good Friday and even on Christmas Day!
What is the current situation regarding opening on Christmas Day and Good Friday in Northern Ireland. Please reply to this blog.

The pregnant response from a Mairie in France

I wrote to a local council in France concerning a dangerous road that could benefit from speed humps to slow taffic down. There had been more development of housing further up the hill and naturally more traffic that made the job of getting out of the development near the bottom much harder.

The letter I sent was dated the 2nd June 2009. The response was sround nine months later in their letter dated 8th March 2010. Not bad for a "pregnant letter response"!

In fact my original letter was dated the May 2005 (which was hand delivered) and although other local residents contacted the Mairie on the same subject they never bothered replying. They did however put some "slow down" markings in the road, but these have been well worn away now and need to be done again.

The Mairie replied in their two paragraph letter of the 8th March saying it is dangerous to put speed humps on a bend. If they had put at least two of these in place on the section of road in question they would not actually be on the bend. I might consider replyling, knowing perfectly well that the response could take a long time.

I did in fact email the Mairie last September about the issue of these speed bumps (not knowing their response to my 2nd June letter was in fact being dealt with in a very slow process) however the emails were never replied to.

Do you have any similar experiences? (If so please reply on this blog)

This not quite like the help I received from a local Councilor in Dublin, Ireland a while back. I contacted this person about a road issue and whether it was because there were elections due a while later or the fact that the councilor was very professional, a report on the road was actually sent by Dublin City Council. Altogether very good customer services.

In England when I recently had to contact the local Council on an issue, replies were very quick in coming back.

So what is the problem in France. Is it like with retailers if you want to return a product. They can't handle customer service. I am certainly very cautious when I go shopping in France to make sure I don't buy the wrong product or one I don't want. Ireland certainly does customer service a lot better.
Posted by Philip Suter at 23:49 No comments:

At a glance Guide to Nice France

We received the Spring 2010 edition of "Destination France" magazine a couple of weeks ago and found a very interesting article entitled "At a glance guide to Nice" .
It is a most imforative guide by Gillian Thornton. Destination France has given us permission to re-produce the article in full at cotedazurrental.com including a great selection of photographs like the one on the left by Frank Follet.
They offer a guide to various hotels and restaurants as well.
As Gillian says in the article "Mention the name Nice and even people who've never been there have a mental picture of this iconic Riviera resort with its shining super yachts, smart hotels, historic buildings and fashionable boutiques.

Nice epitomises the elegance and affluence of the south of France and yet the city has only been French for 150 years. In June 1860, it was handed over to Emperor Napoleon III by Victor Emmanuel, leader of the state of Savoie, in return for military support. This year, the anniversary is being marked with 150 individual community projects, all aimed at making this delightful city even more attractive. Facades will be renovated, gardens landscaped and buildings restored, so if you've never enjoyed the unique atmosphere of France's fifth largest city, there couldn't be a better time to visit. The city is easily accessible from the UK by low cost flight or by train via Paris."

To read the article in full visit http://www.cotedazurrental.com/Nice_at_a_glance_guide_DF.htm
Posted by Philip Suter at 07:49 No comments: 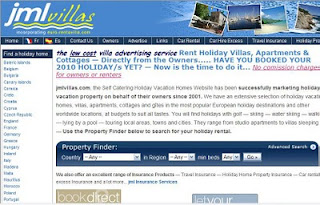 2nd April 2010 - We received the following email enquiry at jmlvillas.com this morning.

I notice, that although part of the UK you do not have a section for Northern Ireland

We replied: Thanks for the enquiry.

Very difficult to categorise countries on a holiday homes website.

So we have no UK classification no Britain classification, but England Wales, Scotland plus Ireland taking in the whole of the country. Again Cyprus is divided, but again categorised as one country.

The other area that can give comments is with Ibiza, Mallorca (Balearics) some people think they should be (like the Canaries) incorporated in Spain and of course Corsica is not on the France page but as an individual destination as it appears to make more sense to show places as destinations rather than part of to whom they might be associated to politically.

Hope that answers the enquiry and thanks for visiting www.jmlvillas.com

We replied Hi Unfortunately no one to my knowledge has ever advertised one from that area. Seems a shame as there is fabulous scenery about particularly on the Antrim coast.Hope you find something, regards Philip Suter

If you have a self catering holiday rental in Northern Ireland we would love to hear from you. It only costs £11.75 per year to advertise at www.jmlvillas.com and many holiday makers will be considering the "sterling area" this year as the £ pound is not going as far as it used against the € euro.

We hope to hear from you soon.
Posted by Philip Suter at 03:15 No comments: