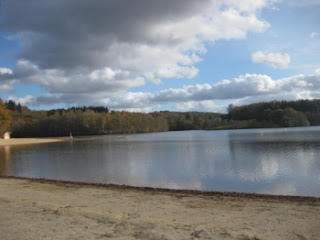 If you have ever fancied visiting Rural France or following the Richard the Lionheart route? Then this is the holiday rental  for you..............

Are you any of the following: a keen cyclist, a fisherman, love the countryside, like mixing with the locals, love peace and quiet, love history, enjoy fine wines, a writer or photographer, interested in chateau's or churches? Again this self catering holiday letting is the one to choose.

Situated in the Limousin / Haute Vienne region of France - Maison Christine is ideal for couples or families. It sleeps 2 - 4 people and comprises of two bedrooms, bathroom, large lounge and kitchen/diner.

There are two Floors with stairs therefore not suitable for wheelchairs or for people who are unable to climb stairs.

It does not have any land attached but there is a childrens playground close by. The village has two bakers, butcher, Clinic, hairdresser, post office and an authentic Frrench village pub / cafe.This property is ideal as a base to visit the surrounding areas as it is in the central part of the village near the ancient church. More information about the local area further down this page.

The master bedroom has a double bed is decorated tastefully in cream and has a fitted wardrobe. DVD Player with a small selection of DVDs

The second bedroom has twin beds and a nice view of the sunset every evening. This also has a small fitted wardrobe and a chest of drawers/dressing table with DVD player.

The lounge is spacious with a sunny feel it has comfortable seating for 3-4 people plus a DVD player and board games. It has soft side lights and pictures of the locality on the walls. The sofa in this room can be used as an extra bed if required.

The kitchen/diner is on the ground floor and has gas cooker +microwave, toaster etc. A pine table with 4 chairs. The door opens onto the street although it is a very quiet side one. The bathroom has a shower plus toilet and sink.

There are also bicycles avaible for hire if required for 4 people and a price to be arranged, which is really good with so much local countryside to explore. 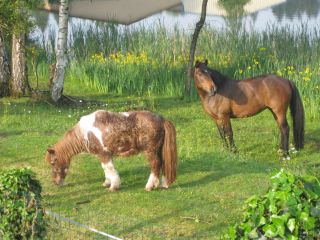 Videix has a pedaloes and small rowing boats on one side of the lake. On the opposite side there are sailing boats and horse riding.

At St Mathieu there are also boats for hire with a restuarant and snack bar. It also has a camp site with toilet facilities. There are changing huts and Showers on both beaches.

There is an exercise challenge course all around the lake at St Mathieu. It is also a fishing Lake. At the small town of Rochechouart there is also a fishing lake, if you are coming for a fishing holiday you are in the right place there is plenty of choice but a fishing licence is required. If you require it done for you then please let the owners know at the time of booking.

It is 40 minutes from Limoges Airport or Train Station. Car Hire is available at the airport and can be booked at the same time as your flight. Ferry ports are approx 500 kms from your destination. The approximate time from  the port is 12 -14 hours.

To find out more go to jmlvillas self catering holiday rentals site here.

Posted by Philip Suter at 00:06 No comments:

I arrived back at Luton Airport late last night and whilst waiting for the off site car parking courtesy bus noticed that the drop off fees had increased by 100% from £1 to £2. We do not have galloping inflation in Britain, however Luton Airport that seems to try anything to bring in more revenue is making the users of the airport pay even more.

After just leaving Nice airoprt in France where they have their "Kiss and Fly" drop of zone and even free parking in the car parks adjoining the terminals for a few minutes, it is a culture shock at Luton and probably not a very nice welcome or departure from England.

Anyone being dropped off at Luton Airport had to pay £1 GBP and if the driver attempted to drop anyone off without going into the zone, risked being filmed and having a large fine of £80.

According to the Luton Airport website, with effect from the 2nd April 2013 "  Priority Set Down - Drop Off and Pick Up. £2.00 for up to 15 minutes. Cars must not be left unattended. 2 minute walk to the terminal, or Short Term Car Park - Drop Off, Pick Up and Parking £3.80 for 30 minutes, 4 minute walk to the terminal." (From experience unless you pay cash or by debit card there are fees for credit cards as well.

Finally "Mid Term Car Park - FREE Drop Off, FREE Pick Up and FREE Parking for up to 30 minutes. 2 minute FREE bus ride to the terminal"  This is all very well, however when you take someone to the airport, like you do at London Heathrow for example you like to get them as close to the terminal as possible.

So even with the new £2 fee, the passenger still has a 2 minute walk to the terminal building and the majority of this is nor under a covered walkway. You would think of all of these £2s they are now collecting they could at least build a covered walkway. If you stay longer than your 15 mins you can be fined £80. 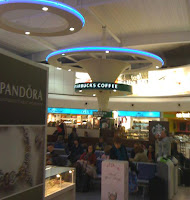 It looks like there are fewer seats for people waiting for flights now at the airport. There used to be three areas for the public to sit in. Since my last visit in January one section has been removed and space rented out to another eating operation. This means that there is only the area near Starbucks coffee (pictured left) and near Pret á Manger. Will this mean it will be standing room only when the airport is very busy or there are flight delays? Probably yes.

I also noticed I could no longer get free Wifi. Maybe it was just my iPhone, but it would not surprise me that it is something else they are making customers pay for. After all Luton is one of the few airports whereby you put money in for a trolley, but don't get it back again.  What will they think of next?  No doubt the drop off fee will be increased again and every time it is, the price of a taxi journey will have to go up as well.

The airport has to make a profit for the Spanish company managing it, but is this really the right way?
Posted by Philip Suter at 05:13 No comments: