﻿
I went to see Ibrahim Maalouf  and Sting play at the Juan-les-Pins Jazz Festival last night. It was a sell out performance with additional standing space included because of Sting's appearance. 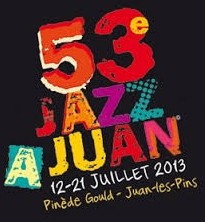 Thunder storms had been forecast, however fortunately there were not any as all the spectators are out in the open in the Pinède Gould (pine grove) overlooking the bay and Mediterranean.
At the entrance security staff were searching people for cameras. They would not let me take in my small Panasonic Lumix camera and it had to be left with crash helmets and other objects not permitted.
I know that the Festival has strict rules about taking photos and having had a page at http://www.cotedazurrental.com/Juan_les_pins_Jazz_festival.htm for a number of years only permitted photos with the photographer's name can be used. The Office de Tourisme & des Congrès at Juan Les Pins has supplied authorised photos over the years  for Cotedazur rental.com that cannot be used on other sites without their consent. I was told that "the English do not realise that it is French law not that stops people bringing in cameras". 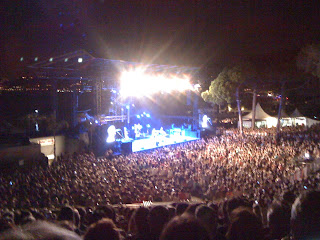 Once the event started out came the mobile phones. When Sting was performing there must have been several hundred filming and taking photos of the performance. The rule on cameras seems rather outdated when so many people have mobiles now that take pictures.

Ibrahim Maalouf 's performance was very good and his "North African" touch of music to jazz is excellent.

The second part of the evening featured Sting. His music in my opinion could not be  described as jazz, however he pulled in the crowds for the evening. In one of the final numbers Ibrahim Maalouf came back on with his trumpet and these two artistes performed together. Sting had a great backing group and the performance finished off just after midnight following several encores.

Last night was my third visit to the festival and will certainly be back again next year. I expect the camera rule will still be in force!

The festival is now in it's 53rd year and is held in July each year. It is running till the 21st July this year and for any major artist appearing it is well worth booking in advance.

I made my comments to my contact at the Service Communication Office de Tourisme d'Antibes Juan-les-Pins about having my camera removed and all those mobiles taking photos and videos. I received this reply "We have a contract with the artists and the contract says : no photos  (and all the artists refused photos).So, we have to check and forbid the cameras, it’s our duty. Phones are not cameras so we can’t forbid them. People are informed that photos are forbidden, they don’t respect the wishes of the artists performing and if they use them on web or other means, they do do so at their own risk because of copyright issues."

This is indeed a very fair comment that the organisers are making. At Cotedazurrental.com we have now been provided with authorised photos by  Gilles Lefrancq of Ibrahim Maalouf and Sting-