Good news for those dining in French Restaurants this summer 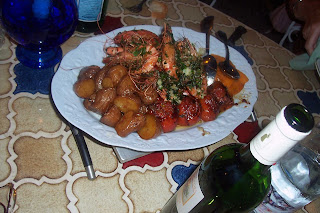 France is cutting the rate of VAT in restaurants and cafes from the current rate of 19.6 per cent to 5.5 per cent. This should mean the costs of meals will be 10% less.

The move is at the start of the main two month tourist season in France . France’s Minister for the Economy, Christine Lagarde said that allowing people to continue to dine out will encourage improvement in France's area of expertise..The reduction in VAT is going to let France ... conserve and improve its culinary reputation.

In order to secure the new lower rate, trade bodies promised to hire more workers for the restaurant industry, pledging to recruit a new 40,000 workers including 20,000 young apprentices. The change of ratee will cost the country 3 billion euros. In March 2009 a deal was made in Brussels with the EU that permits member states to reduce VAT on a number of services including restaurants.

So if food in restaurants is going to be cheaper this summer for the self catering holiday maker, then there is still time to find a bargain rental property at jmlvillas.com. There are over twenty one pages of self catering rentals in France to select from. Bonnes Vacances en France
Posted by Philip Suter at 09:18

A good way to boost tourism and encourage people to spend. But may be a bit risky during these times. A great bonus if you have vacation house France, because this would make your holiday even cheaper.