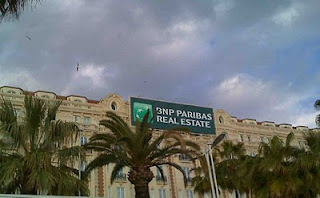 Is the Carlton in Cannes up for sale? Passing it earlier this week it had a large BNP Paribas Real Estate sign hanging from the front.


It does not appear the hotel is being advertised for sale, but Cannes is hosting the 2010 MIPIM conference between the March 16 to 19th March 2010.


This is the large gathering of international property professionals. According to a report in "The Daily Telegraph" earlier this week,

"Around 38pc fewer delegates will attend the annual Mipim property conference in Cannes this year than in 2008. The number of attendees will be in the range of 17,000 to 18,000, according to registration figures, in line with last year but far fewer than the 29,000 of 2008, reflecting how much the commercial property industry has changed during that period."

On Monday this week in mid afternoon the majority of delegates must have been hard at work as there were only a few ( wearing suits) walking around eating ice creams or sitting in bars opposite the Palais des Festivals et des Congrès de Cannes and from the number of vans dropping off equipment along The Croisette looked like they were still finishing off the preparations for this conference or starting on the next one.

"The Irish Times" Thursday 18th March Property section had a heading "No Cannes do for Irish" saying that " Only a handful of Irish are in attendance.

Not surprising given that tickets for the event cost the guts of €1,000 and hotels triple their rates for the week.The few estate agents who are in attendance are busy, we hear, fielding questions about Nama and the state of banking in Ireland.

Caroline McCarthy of CBRE said it was a shame that more Irish were not there to fly the flag at this time.She was also disappointed that Dublin wasn’t able to rise to its own stand, whereas Belfast is getting a lot of attention at the show which ends today."

The Cannes Film Festival (Festival de Cannes) is now not too long away, this year being held between the 12th to the 23rd May. There is always plenty to see and do along the French Riviera and at http://www.cotedazurrental.com/ there are features on the Cannes Film Festival, Historic Monaco Grand Prix and Juan Les Pins Jazz Festival. You can also arrange self catering accommodation in the area from links on the cote dazur rental.com site to the jmlvillas.com site pages at http://www.jmlvillas.com/search.php?country=France®ion=Cote+d%27Azur+%28S%29

Spring had finally come to the south of France this week after the long hard winter so it is worth taking a look at.

Why is this on sale? is it because the owner is not making a great acheivement from this building? This must be sold like a wholesale items.

Any business could be for sale for any number of reasons... Hope whatever arrangement had worked out for both buyer and seller...by wholesale handbags