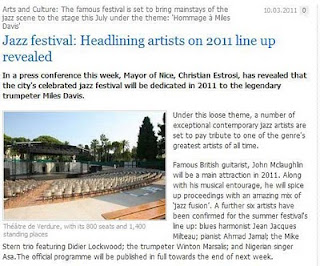 The Riviera Times has reported that in a press conference this week, the Mayor of Nice, Christian Estrosi, has revealed that the city's celebrated jazz festival will be dedicated in 2011 to the legendary trumpeter Miles Davis.

The festival takes place from the 8th to the 12th of July. After an initial buzz that global superstar Prince was to take over the directorship of the festival, it was announced in January that the event's new Artistic Director was in fact Harry Lapp, founder of Strasbourg Jazz Festival and previously in charge of the programme at Jazz à Juan. See http://www.cotedazurrental.com/Juan_les_pins_Jazz_festival.htm for details about the 2011 Juan-les-Pins Jazz Festival - Jazz à Juan- Jazz in Juan Festival

Read the full report from The Riviera Times at http://www.rivieratimes.com/index.php/culture-article/items/jazz-festival-headlining-artists-on-2011-line-up-revealed-1003.html