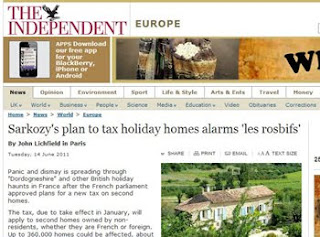 Apparently this tax, due to take effect in January 2012, will apply to second homes owned by non-residents, whether they are French or foreign!

Up to 360,000 homes could be affected, about half of which are thought to be owned by British nationals.

Under the new law, the taxman would charge 20 per cent of the theoretical annual "rental value" of a second home, whether it is rented out or not. Homes rented out full-time will be exempt, since their owners are already assumed to pay sufficient French tax.

Read the rest of the aricle Here

A meeting was held on the weekend of the 18th / 19th June -11 with President Nicolas Sarkozy, Budget Minister François Baroin and senators representing French nationals living abroad, the proposed tax was dropped.According to a report in Citywire Money "The decision to scrap the tax may well have rested on the fact that French expats – who would also have been subject to the new tax – will for the first time have a chance to vote next year in the presidential elections. Sarkozy is currently seeking a second term in office"