End of the hot dry summer in the south of France 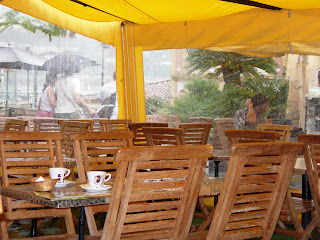 There were isolated storms on the French Riviera on the 13th September 09 and although the Monday was generally good, suddenly more rain over the next 48 hours over Cannes than would normally fall in the entire month of September. Since the downpour, shops, restaurants and private householders have been counting the cost of the flooding. Claims under the departments natural disasters umbrella must be registered with insurance companies within five days of the event.

Cannes has had similar weather in 1999 and 2005 and it looks like The damage is now expected to run into millions of Euros.

Other areas have also been affected including Marseille. The old port area was hit by flooding and vehicles carried away in torrents of muddy water. Listening to Riviera Radio on Tuesday, parts of the A8 Autoroute was disrupted by the heavy rain and commuters between Nice and Monaco faced a nightmare with no trains able to leave the Principality owing to a rock slide on the line at Eze Bord de Mer.

Authorities are examining the cliff face at Eze near the Cap Estel tunnel to see how unstable the rock is.It may be necessary to close the Basse Corniche to traffic at some point to carry out repairs but the road remains open for the time being. What a contrast to driving through Cannes twice on Saturday 12th September when the town was packed, the boat show in full swing and it was very hot and sunny. It was still 24 degrees around 9.00 that evening with every sign that the excellent weather would continue. The present ten day weather forecast for the Nice area has rain forecast till Monday 21st September and better conditions after that.

It can certainly rain in a very heavy fashion in that area as the picture on this page shows taken in a restaurant at Villefranche-sur-mer in September 2005. More information about the south of France can be found at www.cotedazurrental.com
Posted by Philip Suter at 09:43