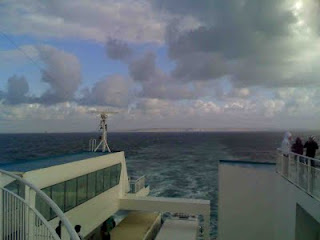 Just come across a couple of stories involving car ferry crossings between France and England and France and Ireland.

The second is "Celtic Link Ferries (Ireland) New Route Announcement" - Celtic Link Ferries (Ireland)Ltd are pleased to announce the the acquisition of a new vessel and the opening of a new service between Cherboug in northern France and Portsmouth in southern England. The new service will commence in October 2009. The Vessel will have a capacity of 130 trucks or 500 cars, and will be capable of carrying 1000 passengers. More details at http://www.villa-rental-france.com/Tips_and_Topics.htm#LD

The picture on this page was not taken on one of those long routes, but on the Calais - Dover route earlier in September on a Sea France car ferry. One of those late afternoon crossings where you could see the French coast practically the entire way to you entered Dover.

Talking of car ferries on longer routes. The Stena Line car ferry "Stena Adventurer" that left Dublin Port at around 8.20 in the morning of Friday 11th September arrived at Holyhead just before 11.30 a.m. Unfortunately they could not unload for an hour and a half due to the fact the ramp would not go down to meet the ferry's ramp. They had to wait till the Irish Ferries "Ulysses" that was moored in the adjoining berth set sail for Dublin. Must have been rather frustrating for those on board.
Posted by Philip Suter at 03:06

very good agreement to hear regarding launching of new services on France ferries. It helps lot of travellers who plan trips frequently.