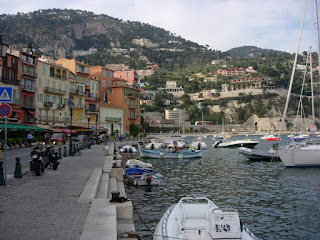 The October - November 09 edition of the English languaguage magazine for the French Riviera "The Riviera Reporter" arrived today.

On the cover is a fantastic view of Villefranche-su-Mer the picturesque village a very short distance east of Nice. The view is taken from the Alps above and at a time when the sun is going down and the lights coming on along the narrow strip of road between the sea and those restaurants overlooking the sea.

Our picture on the left taken in 2005 illustrates the sea, road and some of the restaurants. It is a village that really has not changed at all since I first visited it way back in the very early 197o's. Every Sunday there is a "Flea market" that attracts many visitors. It has a very shetered beach and in January you can see people lying on the beach in swimming costumes sunbathing and others walking along the road behind in fur coats. What a contrast.

It is a popular location for cruise liners to spend a few hours or a day or so in the bay over overlooking Villefranche and Cap Ferat.

The Riviera Reporter has been running for over 20 years now and although other English language publications have moved in on the scene, most of them have folded away and the Reporter is still there six times a year.

There is more information about the Riviera Reporter here at cotedazurental.com
Posted by Philip Suter at 14:40