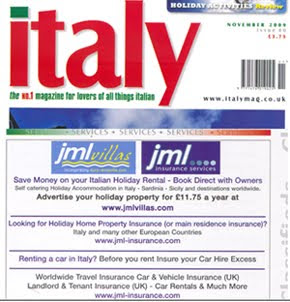 We have been advertising jmlvillas.com and jml-insurance.com in Italy Magazine since November 2004 and have just received Issue No 80 November 2009. It was not good news to read Editor Peter Shaw’s welcome on page 5 that announced that the November edition would be the last “print edition”.

During the past year the magazine certainly looked a lot thinner and the final edition only goes to some 60 pages. It must be very difficult trying to find topics to fill the pages, although there has always been a great mix on culture, food, places to visit and of course high quality photos.

The magazine was launched by Poundbury Publishing in 2002 and Italy Magazine soon became established as the number one magazine for Italy lovers. There logo has the words “the No 1 magazine for lovers all things Italian.

However it is not all bad news, we are now in the Internet age and according to information they have provided to the advertisers is “Italy Magazine has moved firmly into the 21st century with the decision to stop its print edition and concentrate only on its very successful website. Today, Italymag.co.uk reaches more than 1.5 million users across the world, bringing Italian news, travel, food, property and culture to a lively community of Italophiles. It also has a strong presence on Facebook, Twitter and YouTube.” Peter Shaw the editor is to remain as an adviser and we wish them well with the product.

Although so many publications can now be read on line (and certain UK daily papers are considering charging for this) there is nothing like picking up a magazine, getting the aroma of the print and flicking through the magazine (or newspaper) that you can actually touch.

There of course might be other publications that come into the local newsagent featuring Italy. France appears to be the country that is covered the most with at least four publications available and there are two for Spain I am aware of.

Portugal is not covered and you wonder how long the French magazines can continue for in the present climate, particularly when three of them are owned by the same company.

The Internet is the future, but you also need publications in print.
Posted by Philip Suter at 09:23

this is so sad. this publications are very informative. the post that we find in the internet are that very helpful or what we say to be trusted. Online training are great but publications and books are still the beset for me.

its sad to here this news. there printing is one of the best.