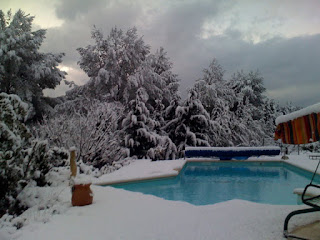 Pictured on the left is a swimming pool that is slightly cooler than normal. Snow hit the French Riviera in the last week and this secene was typical and the property is located only 2.5 km from the sea.
We received an email news sheet from The Riviera Times on Friday 12th February.
They said" While most of our northern neighbours are only just recovering from snow and blizzards, the Riviera is bursting with life and colour under an azure blue sky...
This is how we opened our feature article for The Riviera Times this month, anticipating, as we were, the wondeful winter sunshine that we have become accustomed to in this part of the world.

Sometimes, however, current events can prove even the best weather forecasters wrong.

Because anyone who took their cars on the roads yesterday - in the Var, the Alpes Maritimes or Monaco - couldn't fail to feel the full force of winter as the region was hit by a freak snow storm. The icy temperatures proved that even the sunny south is not safe from the Big Chill that is currently sweeping across Europe."
At Nice airport, some flights were diverted to Marseilles or Rome. So it looks like the residents of the Riviera have experienced weather conditions that have gripped north America and most of Europe since late December.

No problems for snow on the ski resorts. If you are off skiing, don't forget the all imprtant Travel Insurance. Find out more at http://www.jml-insurance.co.uk/types.php?id=36&sec=8
Posted by Philip Suter at 10:24