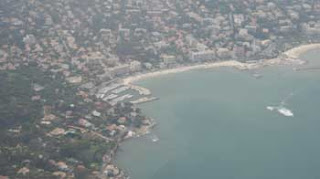 This was the headline that was in Thursday 25th 2010 "Irish Times -Property Residential" section.

It appears from the article that Irish people under financial pressure at home are trying to release the equity they sank into second homes on the Riviera.Agents like Ennis, of World Homes Investments in Dublin, sold apartments and villas on the Riviera as prices rose between 2000 and the peak in 2008, many by as much as 70 per cent. They have fallen since then, but not by much more than 10 per cent, according to Ennis.

The French property market has proven more stable than others in the world recession, partly because of France’s lending rules. And the Côte d’Azur is one of the most stable French markets because of its popularity with holiday homebuyers around the world. Some locations along it – like the Croisette in Cannes – are fairly impervious to price cuts.

The main market for sales are buyers from the north of France looking for holiday homes, with Italians beginning to come back into the market. Two to three months is the average time it takes to sell a property, says Ennis.

Hilary Larkin of Hilary Larkin Properties, based near Cannes, is another Irish agent who has now switched mainly from selling French holiday homes to re-selling them for mainly Irish and UK buyers. Prices have risen, then fallen, she agrees, but location and other factors determine by how much: Irish people who paid over the odds when the Irish market was at its peak around 2006 may find the value of their property has fallen more than 10 per cent.

Mairead Information Services offer a service for assisting with looking after the rental and their details can be found at http://www.cotedazurrental.com/Mairead_Information_Services.htm
Posted by Philip Suter at 01:35