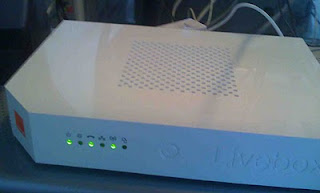 If you own a holiday home in France and need Internet and email access, you can take regular trips to the local internet cafe or look for other alternatives.

For many years I used a free dial up service. It was of course a lot slower than broadband and blocked the telephone line, but the service was good. I used Tiscali and then Tiscali in France was taken over by Alice. All went well for a couple of years till I tried to log on at the end of 2009. No service.

I did a Google search for people's experiences using dial up in France and found out that as Alice had been taken over by Free, the "free dial up service" had ended one day in November. No longer Free and I was stuck in Internet wonderland that was not so great.

I had to use a dial up service in the UK which was very expensive and decided to get the French equivalent of broadband.

As the telephone line was with France Telecom, I was advised to get an Orange Internet system. I was able to apply on line back in England and fell down at the mobile phone contact. I had p[reviously let my French "nomad" / pay as you go sim card expire and the online application will not work with an UK mobile number.

A family friend in France offered his one and knew about the situation.

The "Livebox" (pictured above) was meant to have been posted out and that is difficult when you are not always in residence, so in March went into the local Orange shop. I was told the box would be in the post and explainmed that we were only staying a few days. They had also told us codes would be posted out and as the phone bills came to England, I said would the Livebox come there as well? At that point the representative feared that could actually happen so went to the back of the shop and got a brand new Livebox out.
After a brief discussion as to what might happen if the original Livebox that should have been posted out actually arrives was told don't worry, even if it arrives next year, just return it to them!

The installation should have been straightforward had the letter arrived with passwords and codes, however after and hour on the helpline a member of the family was able to obtain sufficient information to get the system working.

Sometime after returning to England, I received a phone bill for the new system. Unfortunately this could not be paid via direct debit as they could not transfer the old details from FT to Orange. If you did not pay within so many days you could be penalised. I could not pay on line as I needed the "missing" password.
As I was off to France in late April I decided to sort it all out at the local Orange shop. I turned on the computer and immediately had access to the Internet and emails. Excellent. What was not so good was we could no longer make or recive telephone calls as the phone no longer had a dialling tone but an engaged tone.
The people at the Orange shop were very helpful. No they could not take a payment for the phone bill, but gave out a small leaflet that had the phone number of English speaking assistance.
They are very helpful, I was able to pay the phone bill over the phone by credit card and ask why the answer phone no longer works.
I was told I must plug any phones into the bag of the Livebox to make them work. If I wanted to use the old phone sockets this would cost around €15 a month extra.

Basically it means if you have phone wires around the house they are useless as you have to arrange for hidden wires to be installed from the location of the Livebox. This is somewhat crazy, but you can live with thin in a holiday home, but it is a shame we had new tiles put down on the floor a short while back as otherwise we could have had more wires hidden.

To sum up we have Internet now, the telephone line is not so clear and you have strange noises at the same time as the dialling tone. The green lights on the Livebox tend to go out from time to time ( I don't think they are very good router units) and the Internet fails and of course the phone. If there is a power cut, forget the phone as it will now only work when the Livebox is switched on.
If I was living in France permantly I think I would rather have a more reliable system.
If you have any experiences, let us know via this blog
Posted by Philip Suter at 08:23